I’m a Fulya Kantarmaci and welcome to FRED Watch where we review everything from the mainstream to the obscure. To celebrate the thirty-fifth anniversary of its establishment this year, I will be reviewing the animated movies created by Studio Ghibli. Today’s film is Kiki’s Delivery Service (魔女の宅急便). 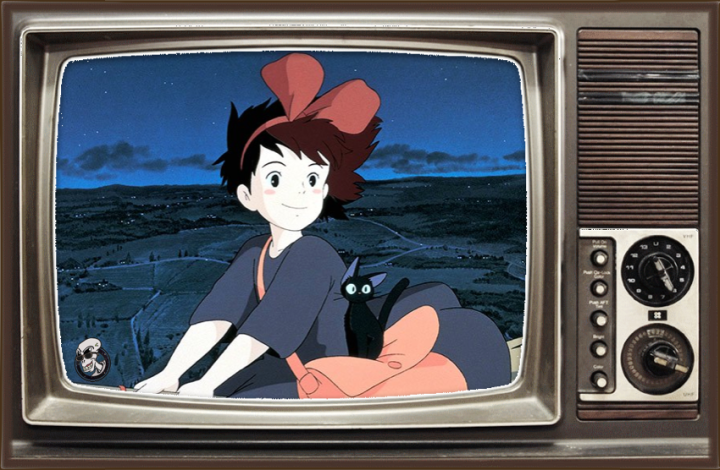 A trainee witch leaves home with her black cat to become a great witch by going on a year-long journey of discovery.

No this isn’t the cartoon version of Sabrina the Teenage Witch. This gorgeous animated film is about a thirteen-year-old witch who wants to become a great witch and must go on a journey of self-discovery in order to do it. This teenage witch is Kiki (Minami Takayama) and she is ready to discover what her skill is to help others around her. Kiki takes her mother’s broom, her bag, her black cat Jiji (Rei Sakuma) (whom she can understand), and her father’s portable radio. Once she is ready, Kiki takes off into the night sky to find her new home for the next twelve months.

During her flight, Kiki comes across the port city of Koriko and decides this is where she wants to be. While in search of a place to live, Kiki is followed by a young boy named Tombo (Kappei Yamaguchi) who is obsessed with aviation and really admires her flying skills. Eventually, Kiki finds a place to call home thanks to a kind and heavily pregnant bakery owner Osono (Keiko Toda). In exchange for the accommodation, Kiki agrees to help out around the bakery, during which time she discovers that she can use her flying ability to deliver goods. With that, Kiki’s Delivery Service is open for business!

Written, directed, and produced by the great Hayao Miyazaki, this is a feel-good movie for the whole family! Kiki’s Delivery Service has so much heart and deals with common adolescent problems such as finding a job, becoming independent, and seeking acceptance. Kiki is also very vulnerable once she leaves home but luckily, Jiji is there as her wise companion to help her with certain decisions—that’s if she decides to listen to him.

A combination of traditional and contemporary themes are evident in this film. An example of this is with how Kiki dresses as a witch—traditional black dress but with a bright red bow adorned on her head. She also cooks using a wood-burning stove and flies her mother’s old broom. And of course, having a familiar is definitely a witch tradition.

I love the use of colour in this movie. It helps to bring out the details in the scenes without being too bright. The contrast between night and day is also very beautiful, especially when the weather changes on screen. Oh, and can I just say how appetising all the baked goods look in the bakery? The whole shop is covered in varied shades of brown and beige, and it doesn’t look dull at all!

Watching Kiki fly around on her broom always makes me daydream of me being able to fly around like that so freely. Speaking of, Miyazaki seems to have a fascination with aviation as it is used in a few of his other films. In Kiki’s Delivery Service, Tombo is obsessed with flying and he is given the opportunity to go on a ride on a dirigible with his friends. He also creates a flying contraption using his bicycle. And let’s not forget that witches fly on broomsticks. I would like this flying ability please!

The film does go into a negative turn when Kiki becomes depressed, is unable to understand Jiji, and loses her ability to fly. I won’t go into too much more detail, but this Studio Ghibli movie is well-worth checking out!  4 / 5