I’m a Fulya Kantarmaci and welcome to FRED Watch where we review everything from the mainstream to the obscure. To celebrate the thirty-fifth anniversary of its establishment this year, I will be reviewing the animated movies created by Studio Ghibli. Today’s film is My Neighbor Totoro (となりのトトロ). 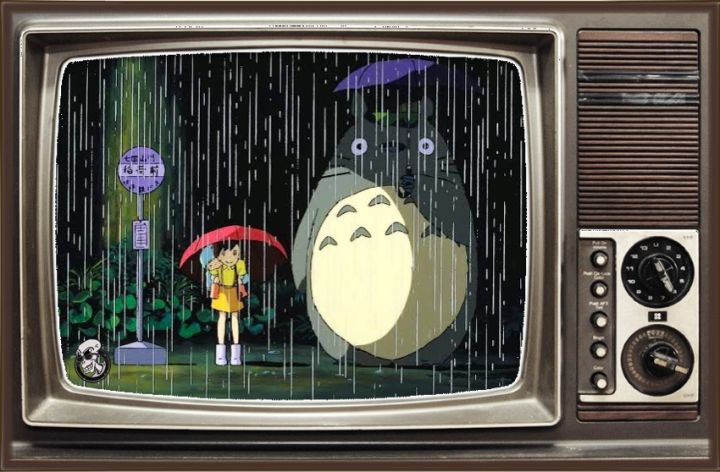 Two young girls (Noriko Hidaka and Chika Sakamoto), who have moved to the country with their father (Shigesato Itoi) to be closer to their ill mother (Sumi Shimamoto), have adventures with spirits who live in a nearby forest.

Satsuki and Mei are the daughters of Tatsuo Kusukabe, a university professor. They have moved to the country because the girls’ mother, Yasuko, is in a hospital there recovering from a long-term illness. The house the family has moved into looks very run down but that doesn’t dishearten Satsuki and Mei as they are too excited to worry. While they are cleaning and preparing the house, Mei discovers that the house is occupied by something she’s never seen before: soot spirits. She captures one but only has soot-covered palms to show Satsuki by the time she finally finds her older sister.

One day, Mei makes another discovery, only this time it isn’t a soot spirit. She sees two small spirits heading towards the forest and decides to follow them into the hollow of a large camphor tree. At the centre, she falls on top of a very large monster-looking spirit. After asking him what his name was, the response of load roars sounds like “Totoro” to Mei, so this is what she calls him before falling asleep on his belly. To Mei’s surprise, she doesn’t awake on top of Totoro. Instead, she finds herself on the ground at the entry point of the hollow. Mei tells her sister and father to follow her through the hollow so she can show Totoro to them; however, he is nowhere to be found. Mei’s father comforts her by telling her that Totoro will show himself when he wants to.

This piece of art is written and directed by the anime legend that is Hayao Miyazaki. My Neighbor Totoro takes you on a rollercoaster ride of emotions, not to mention making you awe at the beautiful animation work put together by the talented team at Studio Ghibli. The story is absolutely gorgeous and it brings supernatural themes into a reality that seems possible – at least for children. I’m sure there are kids out there who have imaginary friends, so seeing a giant furry spirit is very adorable.

The movie engages you from start to finish, and with characters like Totoro and Catbus, it’s not hard to be engrossed by it. I love the colour palette in this film (and in most other anime movies I’ve seen in my time). There’s something about this anime that always makes me smile and I don’t think I’ll ever get sick of watching it. My Neighbor Totoro is a must-watch, I couldn’t recommend it more! 5 / 5