The past week in Australian politics has rendered me with mixed feelings as the Liberal/National Party Coalition Government feud over the civil rights of their same-sex attracted constituents. Like two cats clawing over the possession of a mouse, parliamentarians of assorted affiliations continue fighting over whether marriage equality should be a reality or not.

When writing Michael and Phillip Are Getting Married in the Morning last year, it appeared that marriage equality would need to wait until the Australian Labor Party were in power; their policy platform includes such a bill.

However, the issue continues to destabilise Prime Minister Malcolm Turnbull. He happens to support marriage equality, but needs to appease the ultra-conservative right faction of his party, who are still infuriated with how previous leader Tony Abbott was replaced.

As history has shown, only the ruling (often oppressive) ideology can action change. So, it is humbling to see that an issue such as queer civil rights is important enough to the dominant heterosexual population to continue to make waves. This time last year, there were only ripples in the water of progression.

Michael and Phillip Are Getting Married in the Morning was FRED the ALIEN Productions’s contribution to that momentum. We, by no means, can take any credit for the turning tide, but the world we’ve been creating for the past several months now seems to becoming a reality sooner than we originally thought. 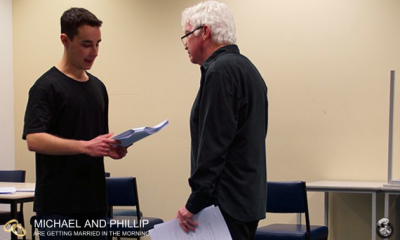 David McNamara and Jeffrey Bryant Jones reading through an intense scene. Even though the show is a comedy, it acknowledges some hard truths about the LGBTQIA+ community’s history.

The show—for us, anyway—will always serve as a bit of a time capsule: Written when same-sex attracted people could not marry, first produced when the issue of marriage equality was hotly debated, and perhaps performed again when Michael and Phillip don’t have to wed in an imagined future.

But what does the current political climate mean for our protagonists Michael and Phillip? Well, it means that their wedding doesn’t have to happen in an imagined time, but it can happen now.

You can meet the incredible cast who are bringing this story to life HERE.

Wayne Stellini is an executive member of the FRED the ALIEN Productions team. He has written and directed episodes of UNI-Bums, and produced FRED’s stage debut, The Writer, in 2016.