What the internet taught us this week… #6

ASK AND YE SHALL RECEIVE⎯

We wanted (and needed) a breather from politics this week, and we got it! Hey, internet, you can be pretty amazing when you want to be. This is how you entertained and amused us this week…

#1: News reporters are some of the best dressed people on television!

Okay, we feel bad that we didn’t catch this ABC News reporter’s name (and, it turns out, we suck at research), but we fell in love with his outfit! Sharp suit, clashing patterns, on-point accessories, slicked hair… He is also a solid news presenter!

#2: This festival goer owns the dancefloor (well, patch of grass, really) like a boss!

There’s something about someone having so much fun dancing to music that brightens up your day! 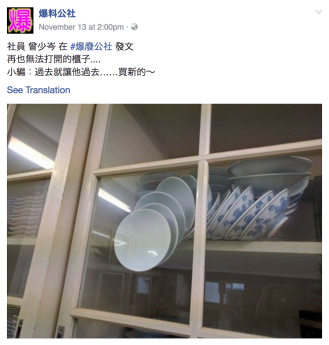 The internet to the rescue! (Image: facebook.com)

#3: 爆料公社 posted on their Facebook page that this cabinet could not be opened without breaking a set of crockery. Because the internet does not understand words such as ‘cannot’ and ‘never’, you came to the rescue! Responses included breaking the top panel of the cabinet’s glass and reaching in to collect the bowls. But points to creativity went to Harikrishnan Renjan, who suggested:

‘Take the cupboard as it is and lay it horizontally by pulling the legs from front side. After making it horizontal, pull up the legs again so that all plates get in the top compartment. Now open the door, the plates are safe!’

Read: More about it here.

#4: Because Melbourne’s weather had no idea what it wanted to do with itself, we hibernated a little (yes, we know it’s Spring) and binged on some classic cinema⎯Sergio Leone‘s Spaghetti western Dollars Trilogy. Linked only by Clint Eastwood‘s The Man With No Name anti-hero, A Fistful of Dollars (1964) and, especially, its sequel For a Few Dollars More (1965) and prequel The Good, the Bad and the Ugly (1966) reminded us the beauty of cinema. The films would not only launch Eastwood into Hollywood, but also offered career-defining roles for Lee Van Cleef and Eli Wallach.

The epitome of genre classics, The Good, the Bad and the Ugly (1966) is regarded as one of the greatest films ever made. (Image: www.allposters.com)

Disregarded at the time by critics, the Dollars Trilogy breaks through genre confinements and are aesthetic perfection. Intense close-ups, beautiful long shots, and sharp editing make full use of the visual medium that is film. The storylines are pretty straightforward and the audio dubbing can get some getting used to (all three pictures were shot without sound), but there’s something incredible about getting lost in nineteenth century America and Mexico. And then there’s that score!

Take on all three films in one hit or pace yourself. We promise you that Leone’s gripping exploration of masculinity, greed, vengeance, violence, and more mean that you won’t believe how fast four hundred and eight minutes can fly!

Watch: All three films on Stan.

For the latest in pop culture news and views, listen to Friday Nights @ FRED’s with Kendall, Michael, and Phillip every Friday evening. In the meantime, have your binge on SoundCloud and remember to rate and review us on iTunes. 👽