DC HAS THE MAGIC TOUCH!

I’m a Kendall Richardson and welcome to FRED Watch, where we review everything from the mainstream to the obscure. Today’s film is DC’s latest superhero blockbuster Shazam!… 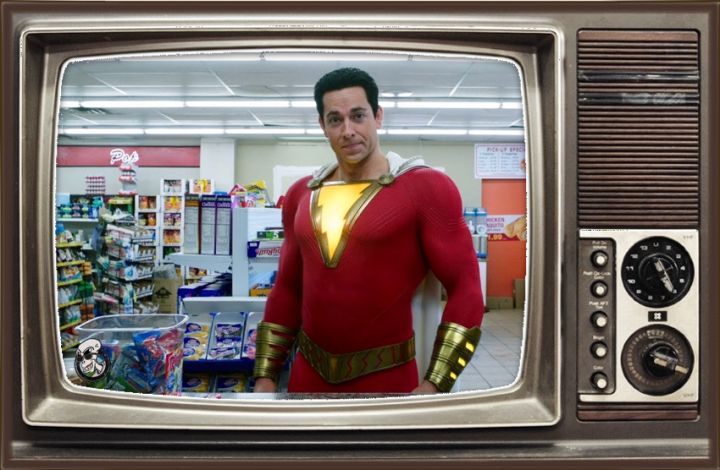 Courtesy of an ancient wizard, streetwise fourteen-year-old Billy Batson (Asher Angel) is able to turn into the adult superhero Shazam (Zachary Levi). However, he needs to master his new mighty skills in order to fight the deadly forces of evil controlled by Dr. Thaddeus Sivana (Mark Strong).

The best thing to come out of the superhero saturation of the movie market is the opportunity that has risen to make different kinds of superhero movies. They don’t all have to be carbon copies of each other. The Marvel Cinematic Universe is most known for doing this by crafting a spy thriller with Captain America: Winter Soldier (2014), fantasy epics in the Thor (2011-2017) films, and glorious sci-fi adventures with the Guardians of the Galaxy (2014-2017). They also have given us two wonderful family friendly films in Ant-Man (2015) and Ant-Man and the Wasp (2018), which is the genre Shazam! occupies fully and without shame or fear.

We appear to be at the beginning of DC following suit by switching things up and exploring brighter and more enjoyable alternatives to the dark and grittiness of the now long-gone days of Zack Snyder. Shazam! works so wonderfully as a family film and we the audience are so happy to reap the benefits. It actually calls to mind family films from the 1980s and 1990s, such as The Goonies (1985) and Jumanji (1995). It captures the magic in a manner that stories were told back then that makes this film feel familiar and welcoming, giving it that much more charm.

Speaking of magic, this is where the story of Shazam! begins. Both the hero and the villain of this tale are born from the wizard named Shazam, the last of his kind, who must pass down his abilities to a true Champion. The villain, Thaddeus Sivana, played by the scenery chewing Mark Strong, is seduced by the evil that Shazam is guarding: The Seven Deadly Sins, who here are depicted as ravenous, monstrous creatures. The hero, Billy Batson (Asher Angel), becomes the wizard’s only hope in stopping Sivana and returning the Sins to their prison. Angel gives a tremendous performance as foster kid Billy, mixing the many facets of his character so well. You laugh when he’s mischievous, you’re frustrated with his stubbornness, and your heart breaks for his loneliness. All he wants is to be reunited with his mother so he shuns his loving new foster family because he knows his real home is with her. Angel’s portrayal is truly touching. Another standout performer in the young cast is Jack Dylan Grazer as Freddy Freeman, Billy’s new foster brother who quickly becomes his best friend. You might recognize Grazer from his memorable portrayal of Eddie Kaspbrak in 2017’s It Chapter One. In Shazam! he proves to the audience he is a force of talent to be reckoned with. His comedic timing is simply top notch, as his plucky attitude and vulnerability are displayed in spades.

Although, Grazer would steal every scene he is in, if it weren’t for one Zachary Levi. There is literally no one else on this Earth that could play the childlike hero as good as Levi does. From the moment Billy cries the name SHAZAM! and transforms for the first time into his super alter ego, you will fall in love with Levi. He is no stranger to comedy, or superhero films for that matter, having played geeky Chuck Bartowski in the comedy action series Chuck and Fandral, one of Asgard’s Warriors Three in Thor: The Dark World (2013) and Thor: Ragnarok (2017). However this was the role he was born to play. He captures the innocence and larrikin nature of Billy Batson completely, as well as the awkwardness of being a fourteen-year-old in a full grown adult’s body—and with super powers to boot! This is where the best parts of the movie happen: the film’s comedy, the ways in which Grazer and Levi play off each other so hilariously, and even the big fight moments between Levi’s Shazam and Strong’s Sivana. There were moments of laughter so hard your stomach would ache and tears would fill your eyes.

And to think this film was directed by David F. Sandberg who, up until now, has made only horror films, including 2016’s terrifying Lights Out, and Conjuring Universe film, Annabelle Creation (2017). He helms his first blockbuster superhero film with complete ease, controlling the fun tone and the highly entertaining action sequences and special effects like a pro. It seems the man has potential to crossover and be a master of multiple genres. Maybe it is something Sandberg and DC/Warner Bros. can work on together in the coming years, seeing how this is the first huge shift in trajectory for the DCEU, as they finally bring comic book movies back to where they belong: a place of fun for the whole family. 4½ / 5