I’m a Wayne Stellini and welcome to FRED Watch, where we review everything from the mainstream to the obscure. Today’s film is Orca… 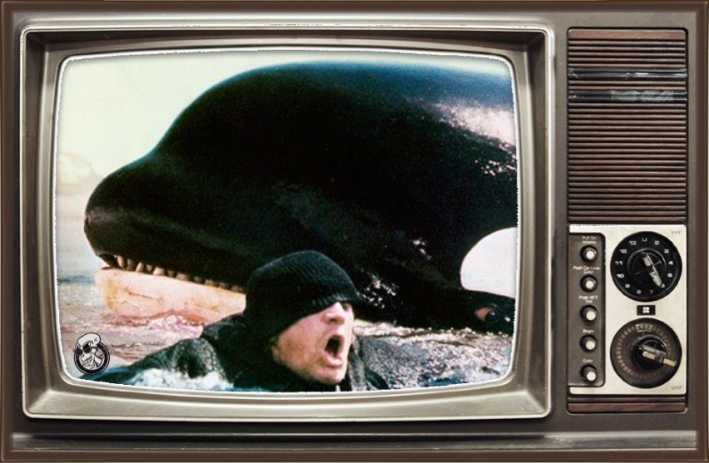 In the business of capturing marine animals for a local aquarium, Captain Nolan (Richard Harris) harpoons a pregnant orca who miscarries and subsequently dies.

Overcome by grief and anger, her mate goes on a rampage against Nolan, his crew, and associates… stopping at nothing until the captain himself has paid for the loss of the orca’s family.

The first in a slew of major productions to rip off Steven Spielberg’s Jaws (1975), Orca falls short in every department. As its own production and without comparison to history-making masterpieces, however, Michael Anderson’s creature feature is a generally entertaining affair.

The film is quick to get straight into the action. And while the continuity of the footage used (natural stock versus artificial “movie magic”) is questionable thanks to the differing colour of the water, some nifty camera work and editing make the opening sequences relatively compelling. The first act climaxes with our titular mammal’s motivation; the unsettling miscarriage and disposal of his child, followed by the suicide of his mate.

In order to keep things as believable as possible, the story involves scientists and experts providing plenty of information relating to killer whales and therefore predicting and justifying the very concept of the film. However, it does not all quite come together. The main reason is that, even in creature features, it is the people that matter most. Richard Harris’s Captain Nolan is too unlikeable to be accessible; his aggressiveness is too prominent, too early on in the piece that the eventual revelation of his empathy for the avenging orca is diluted. Additionally, Orca’s story structure may begin with an effective hook, but fails to maintain it with two-dimensional archetypes, an inconsistent pace, and Carol Connors’s atrocious ballad ‘My Love, We Are One’ to round it all off.

But do not be overwhelmed by the film’s shortcomings. Even though Orca tries hard and fails to achieve what it sets out to, what it does offer still has some value. Taken in the right spirit, the film can be either fun or tragic. The action works incredibly well and the whale is believable enough to keep the audience invested in its plight. It is also the most likeable and fascinating character here.

Upon initial release, this cult classic was torn to pieces by the critics and saw modest box office returns. Admittedly, Orca is perhaps best enjoyed with a cold beer in one hand and a slice of pizza in the other. 3 / 5