I’m a Kendall Richardson and welcome to FRED Watch, where we review everything from the mainstream to the obscure. Today’s film is the coming-of-age drama The Tribes of Palos Verdes… 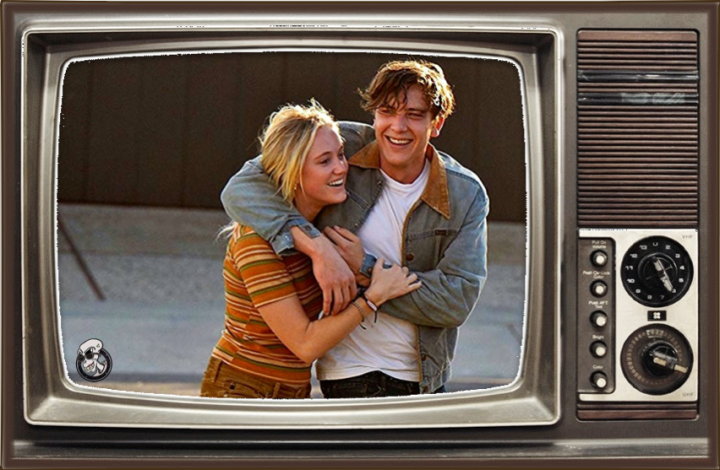 Teenager Medina (Maika Monroe) finds refuge in surfing after moving with her family to the picturesque Palos Verdes, where old tensions resurface, including the breakdown of her parents’ marriage and her twin brother turning to drugs.

I tried surfing exactly one time, in high school, and I was useless at it. I’m not sure if I was lacking the right timing or strength, but I only managed to stand up on the board once. And I crashed immediately like the waves I was attempting to ride. Thankfully, I can say this movie is a lot more successful than my feeble surfing attempt. The young characters at the heart of The Tribes of Palos Verdes ride these waves with just as much ease as they pull at your heartstrings.

Based on the 1997 novel of the same name by Joy Nicholson, Tribes follows the life of sixteen-year-old Medina Mason, played exquisitely by Maika Monroe, and her family upon their arrival to the exclusive community of Palos Verdes, California. Monroe narrates as Medina, painting a picture that sounds beautiful, but her tone speaks quite the opposite. Immediately you know you are in for a rough ride with this film. Monroe excels in this coming of age story, feeling like the only sane person in it, despite her outcast status. It is wonderful to see her fall in love with the ocean, finding the only peace she can by surfing the waves, her escapism from the new home she feels trapped in.

Australian actor Cody Fern plays her twin brother, Jim, and he will break your heart. He fits in with the locals better than Medina, quickly making friends, but his bond with his twin never wavers, despite all of the obstacles thrown in their way. Jim’s descent into drug addicted waters is fuelled totally by the circumstances out of his control, and Fern does a beyond outstanding job of portraying his struggle and eventual loss of his own mind. I solely blame his parents, Phil (Justin Kirk) and Sandy (a remarkable Jennifer Garner) for the terrible journey that Jim ends up on. However the performance given by Fern causes you to never stop rooting for him, even as things just get worse and worse. He is wonderful to watch.

I found Jennifer Garner’s Sandy to be remarkable yes, but very conflicting. Garner is phenomenal but the character itself is very frustrating to watch. There are times when you want to sympathise with her, as she discovers her husband’s affair and struggles to handle the subsequent separation. But then we see her struggle as a complete mental breakdown—the woman clearly needs psychiatric care, yet there are no conversations in the film about wanting to get her some help beyond the occasional throw away lines referencing her ‘meds’. Her mind declines further and further, causing Jim’s own suffering, yet Medina stands almost idly by; she is caught between her warring parents and not actually taking any real action until near the end of the film. By then, of course, it is too late for this tribe of Palos Verdes.

Giles Dunning‘s cinematography offers some gorgeous visuals of the ocean and the surfers on the waves, conveying the same peace that Medina feels when she is a part of the sea. It also does a wonderful job of centring in on the sheer tragedy and drama of the Mason family, capturing the tale Medina tells with stunning shots and moving colours. If you can find this film, I highly recommend it. The waves are rough but their serenity will pull you in. 4 / 5