I’m a Kendall Richardson and welcome to FRED Watch, where we review everything from the mainstream to the obscure. Today’s film is Venom… 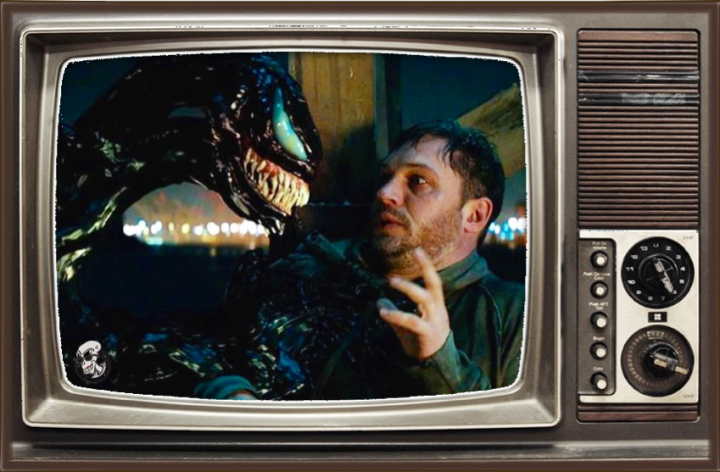 When investigative journalist Eddie Brock (Tom Hardy) accidentally becomes the host of an alien symbiote that gives him a violent super alter-ego called Venom, he must rely on his newfound powers to protect the world from a shadowy organisation looking for a symbiote of their own…

I’m not usually someone who would start off a review by telling people not to read the reviews, but here we are. When the early reactions and reviews started pouring in for Venom, I let out an audible “Oh” and words like “bummer” and “disappointing” were used. I’d had such high hopes for this film and I was really looking forward to it. And as a reviewer, I like to trust the words of my peers, because nine times out of ten, they’re usually right. I am therefore so relieved and thankful to say that this is that one time out of ten where they missed the mark. But to clarify, Venom is not an amazing film.

It doesn’t really hold a candle to anything the MCU or Deadpool has to offer. It is, however, not a bad film by any means. In fact, I found it quite enjoyable and it was surprisingly hilarious. It is basically your standard comic book movie fare, with some wicked action scenes and a couple of cheesy and unfortunate moments (I’m looking at you post credit scene with your over-the-top sequel set-up).

What makes Venom special, though, and worth your time is Tom Hardy’s performance as Eddie Brock. The Topher Grace portrayal of eleven years ago is worlds away from Hardy’s interpretation, as is director Ruben Fleischer’s (Zombieland, Gangster Squad) take on the titular anti-hero himself. This modern day Eddie Brock is in his element as a journalist, and whilst Hardy still doesn’t entirely look the part, he imbues Brock with unwavering determination and great morals.

But the film really gets going when Venom bonds with Eddie. The banter between them makes for the most entertaining moments. Watching the expressions change on Eddie’s face as he has a conversation with ‘himself’ is great fun. Hardy hits all of the comedic beats nicely. He also handles the action scenes like the pro he is, and with the amount of CGI involved, nothing looks faked or forced. Fleischer directs superbly in these moments, catching all the essential elements and leaving no loose ends. It’s a thrilling spectacle to take in. Speaking of the CGI, the design of the symbiotes is simply gorgeous. The liquid way in which they move and the gooey way in which they latch onto things all look super realistic. There’s not a moment of sloppy effects work that takes you out of the film.

Let’s talk about the supporting cast. Michelle Williams doesn’t get a whole lot to do as Hardy’s love interest Anne Weying, but she does well with what she’s given. She’s always a joy to see on screen and she has some nice chemistry with Hardy. Riz Ahmed’s portrayal of antagonist Carlton Drake is great, but it’s essentially your clichéd mad scientist with a God complex villain. Ahmed comes across naturally as such a nice guy, but when the time comes for him to show his mean face, he brings it quite convincingly, making up for his unoriginal bad guy. However, I wanted to see more of Jenny Slate’s character Dr. Dora Skirth. For an actress who is known primarily for her comedic talent and voice work, it’s wonderful to see her stretch her dramatic legs.

The film’s plot isn’t overly complicated and some parts worked better than others. If anything bothered me, it’s that certain things were easily predictable. But I suppose it can be hard in this day and age with the amount of comic book movies being made to always come away with something unexpected. Overall, Venom is a good, fun popcorn blockbuster that works well as they all do, as a form of escapism. Plus, it’s always nice for me to see my favourite city, San Francisco, looking beautiful as usual.

Make sure you stick around to the end of the credits, of course—this may not be the MCU, but it is still a Marvel movie. 3½ / 5