YOU BETTER WISE UP!

I’m a Wayne Stellini and welcome to FRED Watch, where we review everything from the mainstream to the obscure. Today, we look at the television and big screen adaptations of Stephen King’s novel, It… 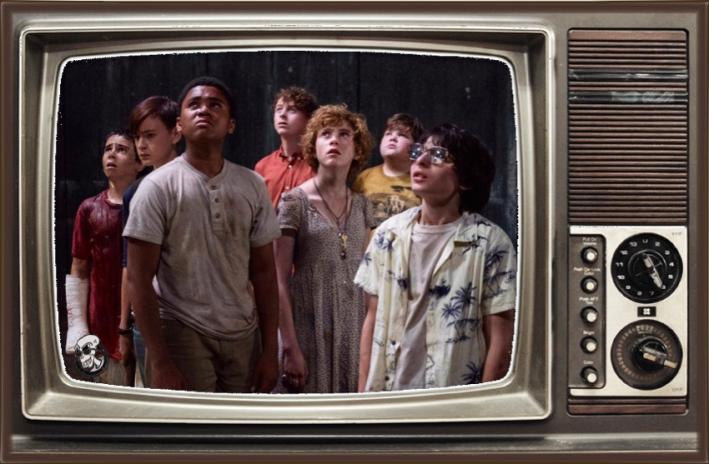 A group of seven outcast children discover and vow to destroy a predatory shapeshifter, mostly appearing in the form of a clown called Pennywise, who transforms itself into its victim’s worst fears…

The 1990 made-for-television adaptation of Stephen King‘s spooky best-seller has all the conventions of the author’s tales. As a two-part miniseries, there’s a lot to get through and is at its best when the action involves the Loser Club (including Jonathan Brandis and Seth Green) hanging out, fending off bullies, and battling killer clown Pennywise (Tim Curry) in the flashback scenes.

The momentum slows down, however, in the second-half of the piece where the kids are reunited as adults three decades later to try and topple their shared boogeyman once and for all. The action isn’t all that gripping, and the manner in which this particular evil force can be defeated or made dormant doesn’t carry much credibility when adults are involved, feeling like an easy cop-out.

An intriguing concept that fails to reach its full potential and, decades on, has not aged well, It is still worth watching if only for some fine performances from the youngsters, a scary turn from Curry, an engaging and sarcastic Harry Anderson, and because it is always lovely to see Annette O’Toole on screen.

Overall, this is a competent but ultimately unexceptional production. 3 / 5

The second adaptation of Stephen King‘s novel was heavily promoted in 2017. The marketing campaign received a mixed reaction from those who grew up terrified of the 1990 miniseries and those who would be exposed to the sadistic, child-devouring Pennywise for the first time. IT had well and truly arrived.

Whether you are a fan of the novel or original adaptation, there is no denying that Andy Muschietti‘s vision has resulted in what has to be one of the most skillfully constructed, aesthetically stunning horror films produced in the twenty-first century. Chung-hoon Chung‘s exquisite cinematography gives the viewer a sense of place, from the darkened interiors to the bright small town landscapes; hillsides and rivers are a stark contrast to sewerage tunnels and dilapidated houses.

Furthermore, our Loser protagonists are perfectly cast. Some have extensive screen time and are fleshed out more so than others, but the young cast work well together with strong, natural rapport. Sophia Lillis possesses a gutsy spark as Bev, contrasted quite nicely by Jaeden Lieberher‘s subtle hero and love interest Bill. Jeremy Ray Taylor does a fine job as new kid Ben while Jack Dylan Grazer steals the show as hypochondriac Eddie. Finn Wolfhard, Wyatt Oleff, and Chosen Jacobs round out the Losers competently, each with their own backstories and quirks. Nicholas Hamilton is ruthlessly on-point as lead town bully Henry, whose sociopathic intensity would have pushed believability in any other director’s hands. Muschietti handles his cast well; most of the adults here are incredibly grotesque, heightening the pressure on the youngsters, who really only have one another. But every character archetype is essentially represented, so there is someone to relate to, cheer on, or boo.

The success of the IT, however, rests on the shoulders of the villain. As the malevolent force at the centre of the story, the perfectly cast Bill Skarsgård is flawlessly creepy. His portrayal of the barbarous Pennywise is literally the subject of nightmares, not allowing make-up, costuming, or special effects to do the work, Skarsgård cements himself as one of the greatest movie monsters of all time.

IT focuses on the first half of the narrative and this is the film’s strength. The element of danger always feels higher when the heroes are innocents, so it remains to be seen if the second chapter in this creepy caper can be as involving. But in the meantime, immerse yourself in IT… and don’t float too far away. 4½ / 5

Let us know what you thought of these films in the comments!