I’m a Fulya Kantarmaci and welcome to FRED Watch, where we review everything from the mainstream to the obscure. Today’s TV series is the fantasy comedy The Good Place… 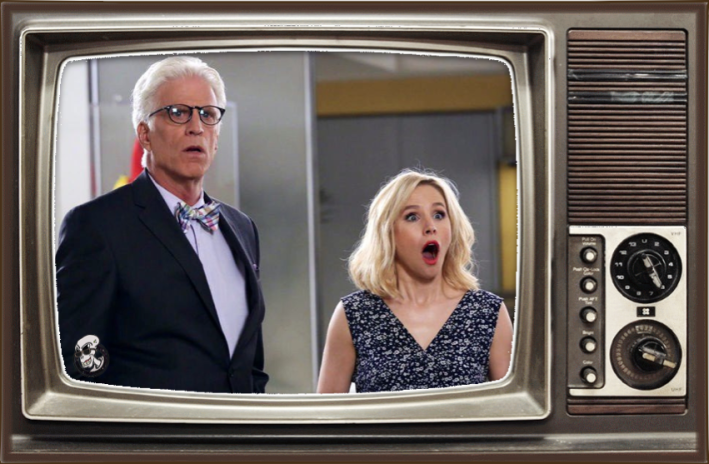 Eleanor Shellstrop (Kristen Bell) wakes up in the afterlife and meets Michael (Ted Danson), who introduces her to the Good Place, a Heaven-like utopia he designed in reward for her righteous life. But Eleanor realises that she was sent there mistakenly and must hide her morally imperfect behaviour and try to become a better person…

I first heard about The Good Place when listening to an episode of the podcast Still Untitled: The Adam Savage Project, where Adam Savage talked about the series. After watching the trailer, I thought, ‘This looks fun, I’ll give it a shot.’ And my binge began!

Picture this: You wake up in a waiting room. You have no recollection on how or when you got there. You are then summoned inside an office where you are told that you are dead. You can’t believe what you just heard but then you are told that you are in ‘The Good Place’ which, according to an architect named Michael, is almost like Heaven where you live the rest of your afterlife in pure happiness… and you even get a soulmate!

The show’s premise is clever and storylines full of hilarity! Every episode has a weird and surprising plot. You are always being entertained no matter which character shows up on screen.

From the get-go, you find out that Eleanor was brought to the Good Place by mistake but tries her hardest to make sure she looked like she ‘belonged.’ Kristen Bell’s presence on the small screen is wonderful and I can’t think of anyone else who could play the role of Eleanor Shellstrop better. Also, the fact that she can’t curse in the Good Place makes it even more funny to watch.

Chidi, who is or was an ethics professor, is Eleanor’s ‘soulmate.’ He is the first to find out from Eleanor that she does not belong in the Good Place, so he helps her to be a better person by teaching her moral ethics. William Jackson Harper makes Chidi, Chidi. He speaks so eloquently in this role, but what I loved most about his character is the way he begins to spiral downwards into anxiety when having to make a decision. Hysterical!

The story continues on by introducing a few more characters:

Tahani Al-Jamil (Jameela Jamil)—a wealthy philanthropist, born in Pakistan and raised in England (almost like she was royalty), who has traveled the world extensively and knows a lot of celebrities… she’s even friends with a lot of them! She begins in the Good Place as a highly-positive event planner and likes to suck up to Michael a lot. Eleanor is not a fan of Tahani because she thinks Tahani is an obnoxious ‘bench.’ (You can’t curse in the Good Place.)

Jianyu/Jason (Manny Jacinto) starts off as a Buddhist monk who has taken a vow of silence, but it is then revealed that he in fact is Jason Mandoza, an amateur DJ from Jacksonville, Florida. He is pretty much in the same situation as Eleanor—sent to the Good Place by mistake. This guy is basically the comic relief from all the drama that happens in the show because of his stupidity, though he does have his ‘smart’ moments.

Janet—the friendly mobile database of the neighbourhood who helps you with anything you ask her. This is one quirky ‘intelligent personal assistant.’ Apparently, her words, she’s not a robot nor is she human. What is she? Well… only the writers know. D’Arcy Carden plays Janet so well, I was always giggling when she appeared on screened. She has great comedic timing!

And let’s not forget about Michael—the architect of the Good Place where Eleanor and all her fellow Good citizens live out their afterlife. You find out later on in the series that Michael isn’t exactly who he says he is. Ted Danson is quite amusing in his role of Michael, perfectly cast with a convincing evil laugh!

Season 1 ends with a bombshell of a twist and sets up season 2 quite well. (No spoilers, here.) Season 2 starts off well, but drags on a little for a few episodes. Nevertheless, it is worth sticking it out for the final episode.

Season 3 is currently in the works and I am definitely looking forward to seeing it! 4/5

Let us know what you thought of this series in the comments!