Holidays. The relaxing sound of beer glasses clinking in some vague European country. The inviting feeling of just staying in bed, in another continent, a twenty-four-hour flight away from your home. Getting out of the work stratosphere, evading carpal tunnel (or in my case, chronic retail overload) to truly reconnect with your fellow people. When, unlike the great Atlas, you are able to lift off the weight of the world, don’t you just want to sigh in relief?

Well, joke’s on you, you have to smuggle your family across the border of war torn Russia instead.

Hello Carl! I’m a Bethany Griffiths, and this is Beta Test. A game review platform where I—worldly, Contiki-brained, self-confessed noob—choose one game a month to go ham on, until either I get better or get wrecked. All in the hopes that I can provide you with a completely unbiased review.

This month I am back on the indie bandwagon, clanging my proverbial guitar, taking my metaphorical ‘shrooms, singing something or other from the Beatles or Hair, and loving every goddamned second of it. Yes, gone is the heinous, Joker-like, consumerist nightmare laugh that plagued me last month. Now I get to listen to the bomb in the washing machine, the gunshots of a tenant killing her husband, and the blissful screams of miners as they run down the street only to trample and subsequently kill my wife. Ah, the serenity!

Can you tell I’m on vacation?

Let me start by saying that above everything, this game is utterly amazing. The way the graphics are incorporated to give that classic indie feel, while maintaining a cohesive, fluid style is delightful. The black and white aura that Beholder gives off, while maintaining a solid colour palate is commendable, and the story line is nothing to sneeze at either. The game really gets you in the mood for the cartoon violence that you have to overcome, the dark imagery gets you revved up for more, and more you shall have with this one.

Developed by Warm Lamp Games, and Published by Alawar Premium, Beholder is the gripping story of Carl, a ministry worker, and his plight as the owner of an apartment building under the fall of the Iron Curtain. This game is fraught with conundrums: from saving people that could easily be killed off, to deciding between saving your daughter’s life and keeping your son in school, to giving people up to the law or squirrelling them away on a barge overseas. I have lost whole days on this game, and I’m still not through discovering all the different nooks and crannies.

When I first started playing, I was trying to go by the rules. I hate hurting people, so I was trying to be as gentle as possible. I soon learnt that that in not an option with Beholder. The trainee level is hard and the main level is almost impossible, giving you next to no money for tasks that cost you a fortune. I think I spent a solid three days trying to figure out how to save up $20,000 to protect my daughter’s life, only to find that I could get the medicine for free by playing dirty.

Normally, I would be more conflicted by the hate that this game seems to have seeping out of its pores. But since this is practically a game interpretation of George Orwell’s 1984, I really appreciate the developers trying to make you think about your situation critically, and assess all your surroundings to take advantage of every loophole you can find. It takes determination, but the payoff is phenomenal in the end. Apart from the occasional bug or glitch, Beholder is amazing for people who want to get into the scene, in an easy to understand but challenging way. (And not to hype the game up too much, but after last month, this was honestly a godsend).

Because of the hours of joy this game brought me, and the sheer stylistic vitality of the design, I give this game:

So, I can honestly say I’m sad to see this game go. It gave me so much and asked so little. Good thing there’s a sequel or I’d be suffering withdrawals! Isn’t that a horrifying prospect? Well, one thing’s for sure, I’ve been a Bethany Griffiths and this has been a holiday mode activated Beta Test: a game review platform where I either got better or got wrecked, all in the hopes that I can provide you with a completely unbiased review. 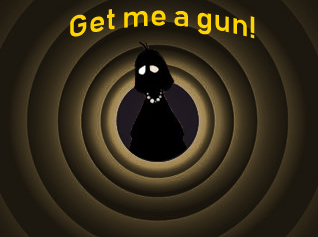