FOR THE LOVE OF SIMON!

I’m a Kendall Richardson and welcome to FRED Watch, where we review everything from the mainstream to the obscure. Today’s film is Love, Simon… 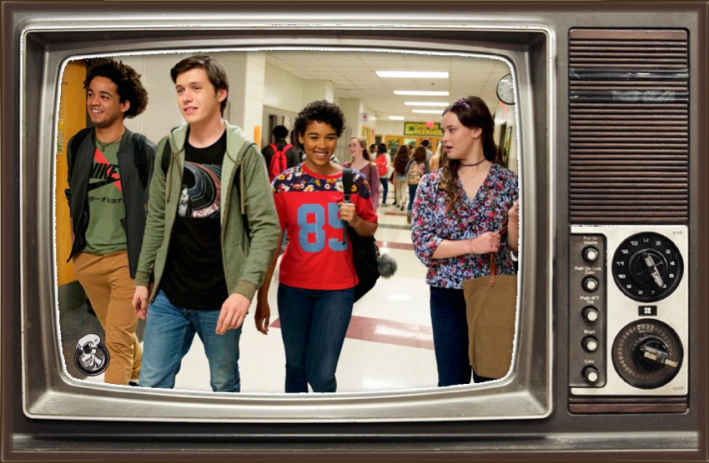 I just watched this really incredible movie, and I think you will love it. I won’t give too much away, but I will let you know what it’s about. The main character is a high schooler named Simon, who’s played by rising star Nick Robinson. After his performance here, I’d expect we’ll see a lot more of him; his portrayal of Simon is so authentic, vulnerable, and done with great care and respect. You see Blue, Simon has this big secret he’s never told anyone.

After another student posts an anonymous letter on the school’s social media site, Simon realises he’s not alone. There is another guy at school who is just like him. Plucking up the courage, he begins a regular email correspondence with him, but the two of them never reveal to each other who they are, despite Simon’s growing desire to. For the first time, Simon has found someone he can completely be himself with, and you feel his excitement, joy, and even anxiety over his situation—we’ve all been there, relishing the rush of just a minute of time with your crush. It is beautifully portrayed.

Speaking of beautifully portrayed, Simon is lucky enough to be surrounded by a small group of really wonderful friends, each of whom all have their own secrets and crushes. His best friend Leah is played coolly by Australian actress Katherine Langford of 13 Reasons Why fame. His other two close friends are sport-loving Nick (Jorge Lendeborg Jr.) and new student Abby (Alexandra Shipp, who played a young Storm in X-Men Apocalypse). Simon’s family are also another group of wonderful people, from his intelligent psychologist mother (Jennifer Garner), to his ultra-sensitive and dorky Dad, played by the always charming Josh Duhamel, to his adorable younger sister, and aspiring junior chef (Talitha Bateman).

There is one exception to this group of wonderful people in Simon’s life, however, and that is Martin. He an odd, slightly eccentric, and over-confident drama student, played by Logan Miller, who is fascinating to watch. You don’t know if he is going to do something super embarrassing or surprisingly wonderful. He is also the film’s antagonist. But I won’t tell you why.

Have I sold you on the film yet, Blue? If not, here are some more cool things you need to know. The soundtrack is off the hook. Singer/songwriter Jack Antonoff picked a bunch of killer songs to perfectly accompany the teenage angst, longing, heartbreak, and happiness. A few of the songs are by his own band Bleachers, who are seriously underrated. I saw them live once and had an awesome time. Also, this film features probably the best drama teacher ever on screen, or at least the sassiest! But seriously, this is a love story everyone will enjoy, whether you are gay or straight or something else all-together. I hope this is the first of many movies of its kind. At last, a story from the perspective of someone we’ve never really heard of. And it’s not an indie movie!

So there you have it, Blue!  Go see Love, Simon. I can’t wait to hear what you think. Maybe we could finally meet and go together?