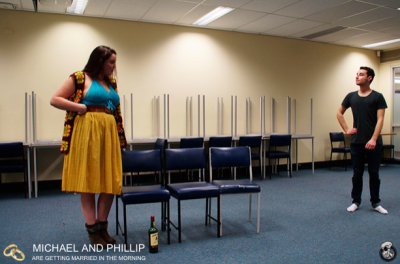 Anna Reardon as Tally rehearsing in full costume with David McNamara as Michael.

It seems fitting that today—World Fringe Day—be one of reflection.

We are at the half-way mark of pre-show preparation for Michael and Phillip Are Getting Married in the Morning. Our cast are developing an uncanny connection to their respective characters, they are feeling more confident with their lines, and we are starting to finalise costumes! It is an exciting time when such physical aspects of a show are first introduced because they help both actor and director learn more about each character and their place in the world.

When first creating the character of Tally in October 2016, the only indication of what her costume should be was ‘wearing sunglasses and the most retro-atrocious outfit conceivable.’ My idea of what that meant exactly changed with every rewrite and read-through, but Anna Reardon, cast as the unsinkable Tally Wolfeschlegelsteinhausenbergerdorff, took to task to create her character’s look.

Needless to say, Tally was the most fun character to write because she is one without limits or restrictions. There was never a time when I would stop and ask myself, ‘Can I write that?’, ‘Can she do that?’, or ‘Can I go there?’

It is perhaps a reflection on the sort of actor Anna Reardon is. Like Tally, she is fearless. I had the pleasure of working with Anna last year, when FRED the ALIEN Productions ventured into the world of theatre for the first time with The Writer. With Fulya Kantaramaci by my side, the black comedy was an interesting introduction to producing for both of us. It also meant that we were able to take a step back and observe the ensemble cast tap into a string of complex characters and dark scenarios.

What struck me was the manner in which Anna was able to show a range of emotions and skills, playing multiple characters including a spoilt lovelorn princess and the queen of the British Celtic Iceni tribe, Boudicca. The material and limited pre-show period demanded a gruelling rehearsal schedule. 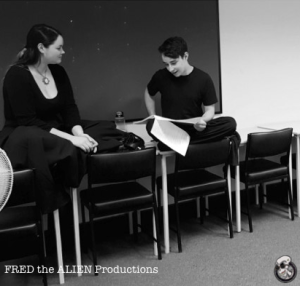 Anna Reardon and David McNamara had first worked with FRED the ALIEN Productions on ‘The Writer’ in 2016. Here, David helps Anna go over her lines before a rehearsal.

Throughout, the cast of nine never failed to impress as writers/directors Michael Davidson and Phillip Hunting coordinated a vision that saw imagination, reality, lunacy, and more brought form the page to the stage. The manner in which cast and crew worked together to bring The Writer to Melbourne Fringe 2016 was inspiring.

What was also inspired was the casting of seven-year-old character Sam. The emotional core and moral compass of the show all linked back to this child, caught in a tug-of-war between his father (Michael R. Lister) and estranged mother (Kerri Gee). The casting of Sam was essential. I had expressed concern to the directors that if the actor who played Sam was not believable, the entire narrative would be lost. It was a burden undertaken by David McNamara. Having watched a recording of his audition, my concerns were immediately put to rest. I turned to Phillip and said, ‘Hire him.’ Although casting decisions are not up to the producers, FRED the ALIEN encourages thoughts, suggestions, and feedback from everyone working on a particular project.

This sort of collaborative culture finds itself in Michael and Phillip Are Getting Married in the Morning. Trusting the actors’ instincts as well as discussing and negotiating what each character would say and do (and, more importantly, why) has proven beneficial to the process. Approaching David to play the lead role of Michael and seeing his stellar audition for the par reiterated what an extraordinary talent he is.

It is overwhelming to think about the incredible new talent this show has introduced me to!

So, on this World Fringe Day, I’m taking a moment to reflect on what (in only two productions!) the Melbourne Fringe Festival has given me as a creative person. It also foreshadows what, if we do our job properly, we can do for our audience.

Keep checking in with what we’re up to and how we are going. Follow us on Facebook, Instagram, and Twitter. And of course, feel free to explore FREDtheALIENprodcuctions.com for the latest on Michael and Phillip Are Getting Married in the Morning. You can also revisit (or learn about) our Melbourne Fringe debut, The Writer.

Wayne Stellini is an executive member of the FRED the ALIEN Productions team. He has written and directed episodes of UNI-Bums, and produced FRED’s stage debut, The Writer, in 2016.