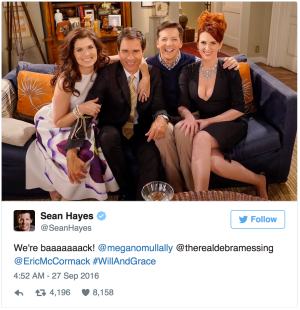 In what could be described as the most exciting television news for a long time, classic sitcom Will & Grace is set to return to the screen.

The internet went into near-meltdown over a series of taunting social media posts from the comedy’s stars, including a photograph of Eric McCormack on set holding a script and making fun of the fact that he now has to wear glasses to read.

Will & Grace ran for eight seasons (1998-2006) and followed the titular uptight gay lawyer (McCormack) and neurotic straight interior designer (Messing). Their friends, socialite Karen Walker (Mullally) and failed actor Jack McFarland (Hayes), were the basis of much of the series’ exaggerated gags.

The series remains one of the most significant in American entertainment

for its portrayal of LGBTI+ characters, as well as depicting positive relationships within that community, as well as with the broader heterosexual population. It was also notable for its on-point pop culture and political references, and its engaging characters and story arches has ensured its staying power.

Will & Grace maintains a strong fan base, and its accessibility through DVDs, online streaming services, and syndicated reruns will not doubt mean that the upcoming reunion will be greeted with open arms.