Only two weeks to go until FRED the ALIEN’s fundraising campaign for The Writer ends! The response and enthusiasm to the campaign and the show itself has been phenomenal so far, but we have a little more to go until we reach our goal of $2000.

What’s The Writer about?

The Writer is an original black comedy that centres on the degenerating mental health of Geoffrey (Michael R. Lister), a playwright and single father whose life is changed with the reintroduction of his ex, Elizabeth (Kerrie Gee), and her desire to get to know the son she abandoned seven years ago (David McNamara).

Sounds amazing. When and where is it playing?

The Writer will be playing at Gasworks Arts Park for four nights only: 13 & 15-17 September 2016. It concurrently forms part of Melbourne Fringe and the Boardwalk Republic.

I WANT TO SUPPORT THIS!

Fantastic! If you were wondering…

Where does my money go? 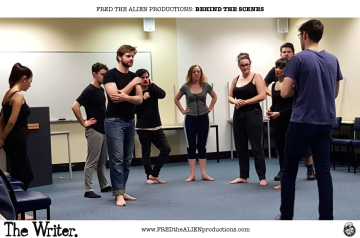 What do I get out of it?

Amazing karma! Not only that, you can pick your perk, based on your contribution ranging from $15-$2000. So, if you wanted to contribute $100, for example, you get a complimentary ticket to see The Writer, a reserved seat in the first three rows (we’ll do our best to get you as close to the front as we can), a signed programme from the writers/directors (you’ll be grateful when they’re super famous), and lots of social media praise!

How do I learn more about the campaign and its perks?

We’re glad you asked. Click right here to look at the campaign. If you have any questions, send us an email: fredthealien.productions@gamil.com

The Writer spiral journal is only AU$15 (excludes delivery) from our online store.

Contributing to campaigns isn’t my thing (long story). How else can I help?

There are lots of other ways you can support The Writer: